The week in review

So, I’m not sure where the week has gone. Seems we just got started and before I knew it…. odd, I think I hear Carol Burnett….

It took a bit to get over the loss of the ducks and chicken, but once I did I was able to concentrate on making a weasel resistant home for the new ones. I should have taken a picture of the dirty dozen, they have grown so much in the past two weeks. I started out the week with demolition of the old duck pen. There is still a small bit to tear down and some  re-enforcement of  some new fencing, but the biggest chunk of work was repurposing the old chicken-coop/goat shelter into a  place that will safely hold a dozen or so ducks. Again, too busy working on the thing to take pictures, I will probably post some to this page in the next two days. 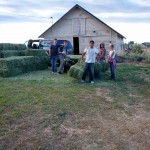 Zac and his crew delivering hay

I realized this week that I was running out of hay. I have most of a 3/4 ton bale left, but that was it. I started noticing that many farmers around had cut or begun to cut their fields. There is a sign that appears on one corner of  our road advertising hay for sale. I have tried in the last three years to call and reserve hay from this guy, but I was always too late. This year I called the number almost immediately and talked to the young man who was taking over the business from his dad. I ordered 5 tons from him and asked for delivery, he delivered it today. Nice group, looked way younger than he claimed. I think that if he is still in business this fall I will be a repeat customer.

Jumping back a couple of days, we were on our way back home from dinner on Thursday and stopped to check on the dirty dozen (ducks). We knew that they had been moved out of the garage and into a small dog run. I looked over to see if I could see the little goat gracie, when I saw this

I posted this to facebook, but just in case you didn’t see it….

I hope to have the ducks home in the next two days, I’ll make a special post to celebrate that event.