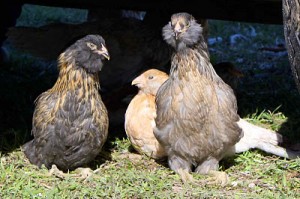 I never started out to raise chickens.

In the first place, my wife doesn’t like them. Something to do with childhood trauma, having to collect eggs, getting pecked at, kicking the nest boxes to move the birds and getting lectured by her dad for it.

While Jon was here he became very enthusiastic about having chickens and did a massive amount of research on different chicken breeds and their needs and temperaments and all. When he finally decided on a breed of chickens, he chose Ameraucana’s . According to the web page FAQ “The Ameraucana breed, ….., has a tail and sports muffs and beard in the facial area.”  These chickens also have blue (not yellow) legs and they lay Easter eggs! 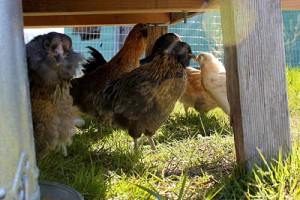 About a week before the goat kids were born, Jon and I made the trip to Blackfoot to pick up the chicks he had ordered. he thought he had ordered one dozen, but when we got there the store owner had reserved 14 chicks for him.

Only one turned out to be a rooster. Jon named him Mordechai. At first it was fun having a rooster, he would crow at all hours of the day, not just at dawn. Then he started behaving kind of aggressively toward the hens. He would “collect” them and crowd them all into one corner of the coop. He would not let them leave the coop and that started stressing out the hens.

We briefly considered just letting him roam the property outside of the enclosure, you know, let him take his chances in the wider world. But in the end, since we did not want to have fertilized eggs, Jon decided to have chicken dinner instead. We slaughtered him one afternoon and had him for dinner the next day. It was a learning experience for both Jon and I. We were literally reading the book on how to do it while we went step-by-step through the process. 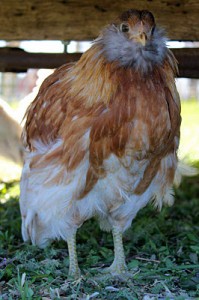 That left us 13 hens and just after Jon left to go back to Seattle they started laying eggs. I got into the routine of feeding and watering the chickens and trying to keep the coop and nest boxes clean. One day I decided to completely remove all of the litter and put in fresh stuff and the hens seemed to be happy with that. I fed them and checked for eggs at noon and then about 3:00 in the afternoon my wife went out with our niece to feed the chickens and one of the hens was laying under the coop dead. No sign of disease or predators, just keeled over dead.

My theory is that this particular hen was the one that had been laying large double yolked eggs and she was too young to be laying eggs that large. I think an egg got stuck inside and it plugged things up and killed her…. RIP Ms. Ostrich.

So now I have an even dozen hens and they are beautiful, bearded, cage free, free range, egg laying machines.

1 Response to The Chickens