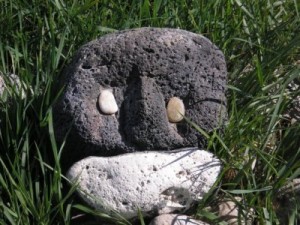 In July of 2010, one day, after I had just finished mowing the lawn, or some other equally exciting summer task, I was sitting on my “back patio” listening to the water fountain and relaxing. I was also looking out at the mess that is most of the corner 5 acres I live on and trying to envision just what I wanted it to look like.

I had been at the task of cleaning up the land for about four years and had recently been hearing the sounds of a goat, as if my neighbours had again gotten some goats to eat their weeds down. I was wondering to myself just what I would do if I had goats to raise on the land, when this very small goat in a red collar tap danced her way up onto the cement pad and looked at me.

I tried to catch her, and she led me around the house a couple of times and then lay down under my truck just out of reach. I called a neighbor and she came down with some oats to coax the goat out from under the truck and when she finally was able to grab her by the collar, the little goat started bouncing between the truck and the ground and the neighbor. My neighbor was bruised in a couple of places, but I eventually got a dog leash attached to the collar and the goat settled down a bit. I initially staked her out under the crab apple trees, found something to shelter her and a bucket for her water and then set out to find her owner. 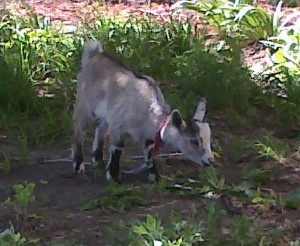 We called every place we knew of that we had seen goats out browsing. This eventually led me to the folks I bought my first pregnant does from. After much searching with no luck, and a couple months of feeding her I decided she was now my goat and since she liked eating the crab apples that were now falling from the trees, I named her “Crabapple”, which became Crabby Appleton, which then became Crabby Abby and now we just call her “Abby”.

She started the whole goat ownership thing for me, and I am glad she came along. It has been fun so far. My son and I then took on a project to re-roof the garage and  the lean-to behind it. I will have to refer you to that specific rehab page when I get it finished. I had found some goats on a Craig’s List ad and it turned out to be one of the breeders I had talked to when trying to find Abby’s owner.

Mark and Nancy agreed to hold the goats for me until I had the shelter and pen finished and fenced, as soon as that was done I went down the road and brought home Connie and Rosie. They were both pregnant and due to kid in March of 2011. So now I had 3 goats with more to come.

The kids were born on March 10. All five of them. I lost one due to ignorance and my own incompetence. It was a painful learning experience and one I hope never to repeat.

1 Response to The Goats