begins really late on a saturday afternoon after all of the chores are done.

I think I will write this catch up post in two parts since I have 4 weeks of egg stats to post and there is a bunch of other stuff to report as well. 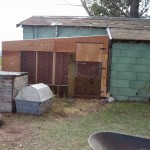 I finally finished the ducks shelter. Two days before we were set to leave for Seattle for Jon and Anna’s wedding. It sits nestled in the corner of the green house as you can see. I designed it to be big enough for the 25 ducks I expected to occupy it and it features a people door at the 7 foot tall end and a duck door at the 6 foot tall end. The height is a bit much for ducks, but, I am tired of having to “duck” inside a structure in order to clean it out. the floor and wall sills are made from pressure treated lumber and the roof has a clear panel to allow more light in during the day. I improvised the handle and latch on the people door. I guess I did the same for the latch on the duck door.

The first thing I tried was to herd the ducks into the shelter single handed. It worked fairly well, much better than trying to get them to walk up a ramp. Then I had to go down the road and bring the last 10 ducks home. We released the new ducks inside the shelter and then turned them out to  join the established flock.Watching the ducks go thru the pecking exercise to figure out  who would lead the flock was kind of amusing. If I can get my wife to send me the video (my phone battery was dead) I will try to post it here. But they all became one happy, noisy, messy family quite quickly. Later that evening I used my observations from the first duck herding experience to improve the operation and it worked even better. Photos of the duck house: 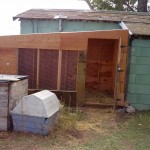 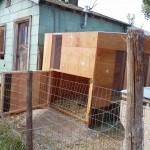 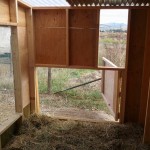 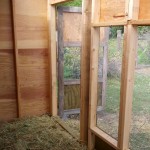 After dealing with the duck situation it was time to do some major cleanup that had been put off, I shut down the sprouted grains project and drained out the catch pan, cleaned up the makeshift work area for assembling the duck house walls and did a once over to pick up the leaves on the lawn. We had a micro burst the previous week that left some fairly large limbs in the yard and I finished cutting those up and stacking them for future fire pit use.

The Saturday morning before we left for Seattle there was a flurry of  activity as those who would take care of the animals came over to get their final instructions and keys to the house and have their questions answered.

I think I will leave the narrative there for tonight and give you the egg stats for the first two weeks. News break! the ducks have started laying!

It didn’t take long to get from 1 duck laying to 2 ducks laying in this timeframe. They are still what you might consider pullet sized eggs.