First a rant about the food bank. Our church puts on a community breakfast once a month. Free to anyone who wishes to eat. In order to provide for all who  need a free meal part of the food comes from our local food bank.(/rant)There are conditions to keep, documenting how many people are served etc. The food we get from the food bank is stuff that will not keep and would have to be thrown away if it is not used. People who can afford to, are asked to donate when they have breakfast. We have some very generous people in the church and money is not a problem.

The problem comes when the old director of the food bank  became a politician. Now the bureaucrats have stepped in and the rules that are imposed from the state capitol can only be described as onerous. I don’t have the time or space here to document the various frustrations experienced by our volunteers, I will only rant about my most recent experience.

Due to the new “rules” organizations using food from the food bank have to order what they need a week in advance. The website used to order is reportedly unusable, and if the ONE designated person cannot navigate that poorly designed site, there will be no food from the foodbank for that week. And apparently the staff at the foodbank do not answer their phone.

I tried to step in and donate eggs from my chickens since I have a surplus at this time and I was told in no uncertain terms that since my eggs were not “inspected” they could not take them. Because “what if somebody got sick?”. I recently read a book by Joel Salatin titled “everything I want to do is Illegal“. At the time I did not quite believe it was as bad as he claims. I only hope it does not get worse, but with politicians in charge of what you can or cannot eat, sell, buy, consume, donate. I don’t see it getting any better. (/rant) 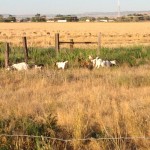 It’s time to wean the girl babies. They don’t quite think so, but they are three months old and if they had been boys, I would have just put them in the pen with the bucks and been done with it. I have only started the process, but have been trying to figure out how to do this by moving as few goats as possible each day. The first thought was to separate the mamas from the babies by putting just them on pasture for the day and bringing them in when it’s time to milk. That won’t work very well. the babies of whichever mom I bring in first will drain her. I am not as fast as the kids at getting milk out of the doe.

So I figured that I would put all of them out on pasture and bring the mamas in to the “milking room” first thing in the morning. That gives the mamas some time to build up milk and eat alfalfa hay and just chill without the kids for a few hours. After I milk them they go back to the kids and have full access to pasture. This all sounds simple and it would be except for the buck. I can’t have Abby anywhere so close to Rascal or they would walk through the fences to be together. I don’t want Skeeter that far away since I am not quite convinced she won’t have kids any day now. Skeeter moped at the other end of the pen because she missed Phoebe………. In short I have only Skeeter and Abby and Phoebe in the main shelter, and everyone else out in the boy’s pen/pasture. Everyone but Rascal who is tied out due to his butthead nature. That may not be the end of the manipulation of the herd, stay tuned.

So I finally got started on the new duck house. I don’t remember is I mentioned this in an earlier post, but the weasel proof duck shelter is inadequate space for 15 ducks much less 25 ducks. I started clearing up the space where the old duck pen stood and have measured and sketched out a plan for a new duck house that should be large enough for all of the ducks. I took a chain saw to the protruding RR-ties and tried to fill all of the gaps in the underside of the green house. I think the ducks found all of the digging I did yesterday and thoroughly explored it looking for bugs to eat. I hope to determine duck gender in the next month or so and hopefully they will start laying eggs

I don’t have any pictures of them, but I bought some cute new chicks. That is to say, my neighbor bought them for me. They appear to be growing well and might be ready to come home when the last 10 ducks are. Lots to do before then! 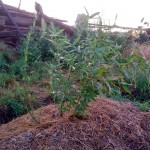 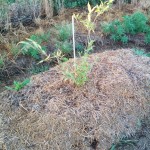 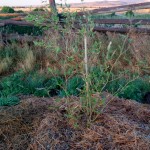 As seen in the photos above the bamboo appear to be healthy and are getting enough water to not only spur new leaf growth to replace the loss from transplant shock, all three of the Bisettii have actually pushed up several new shoots. Some of the shoots were in the container when they arrived, but there are several that I did not see when I planted.

Thats it for this week!