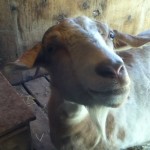 From my observation of the breeding period, I determined that JuneCarter would have her kids on 3/22/2014 and Dolly would have hers on 3/28/2014. The dates were determined using a calculator based on observed “contact” and a 151 day gestation period for goats. 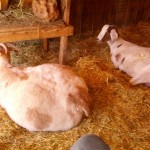 JuneCarter and Dolly waiting for kids

I think I have stated before that I am not out by the Buck pen 24/7 observing goat mating rituals. I can only stomach so much. Well, Saturday came and went with me checking the goats every hour or so and there was NO indication that either girl would be having their kids that day. That is until I fed them at about 8:00 pm. That is when I noticed that Dolly had started losing her mucus plug. It is a quite noticeable sign that labor will be starting soon and so I determined to try and keep an eye on her through the night as far as possible.

I went to sleep and got up at midnight to go check on the girls. There was no noticeable change in their condition, so, I determined that uninterrupted sleep was the better option and went to bed. The dog took me out Sunday morning about 6:15 and I checked again but did not see any change in condition so went in to have a cup of coffee and wait a bit.

About 8:00 I went out to feed and turn on the chickens light, let them out, collect eggs, release the quackens…….. Dolly had started “nesting” by that time and I decided not to go in to church. Marky had to go because her sister was in town and we had planned on attending church and then lunch and then they had an appointment to talk with a woman who is working on the 100th anniversary of Tyhee. So I sent her off with eggs for those who had ordered them and I went out to watch goats. If you get the idea that this is mostly a tedious process, it is.

It was about 11:30 when I went out again and now Dolly was starting in labor for real. Grunting and pushing, she was doing fine and suddenly I saw a nose starting to poke out, but after about 15 minutes I could not see any hooves and I knew there was trouble. I let her struggle for another 10 minutes or so and then put on gloves and oiled up my hands and tried to find the feet to help this kid get out.

Dolly is so small and the kid was extra big and my hands are much too large to do this job without hurting the mama goat. I did the only thing I could think to do. I called the Vet.

Of course they are not open on a Sunday, but usually there is one of them on call and I asked her to make a farm call even if it cost more. I did not want to move Dolly and I noticed that JuneCarter was starting to “nest” as well. By the time the Dr. arrived, Dolly had been pushing for more than an hour. The kid’s tongue was turning blue and I thought he was gone. I held Dolly while the Dr. used her MUCH smaller hands to reach in and correct the kid’s position. With a few more pushes and a bit of pulling He came out and we worked to get him breathing. With all of the pushing and pressure in the birth canal, his head and neck were bruised and swollen. We couldn’t get him breathing and within minutes he stopped trying and was gone. This part of the job really sucks. 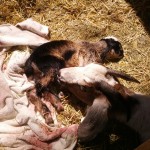 There was one more kid in the womb and she came out back feet first. the first kid was huge and wold have been difficult to deliver if he had presented normally. This one was “normal” size and came out quite easily. She was born at 1:30pm on 3/23/2014. I named her Bunny because if you look at just her face she looks like a lop eared rabbit. The Dr.  let Dolly bond with her for a few minutes and then did an exam to make sure that Dolly was uninjured in the birthing. she reported no tearing or injury as far as she could determine. Deep breath of relief! 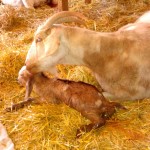 As soon as that was done JuneCarter went into labor. The Dr. stayed around until this first kid was delivered to make sure that there was no problem.  About 2:00pm She pushed out a little head perched on top of a pair of tiny hooves, and then he was on the floor and I wiped his face off and set him in front of his mama. Marky wants to call him Bambi because of his spots, I just call him “the boy” because he will be sold for meat, my brother-in-law Roy suggested calling him Stew. 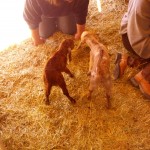 JuneCarter immediately started pushing again. This time only a single back hoof showed and so I gently pulled while JuneCarter pushed and eventually the other hoof presented itself and when I had both of them in hand, gently pulling at about 3:15 pm little Bird was born. she was placed infront of her mama and JuneCarter started cleaning her off, and pushing again. 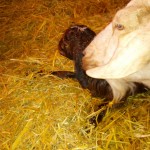 The Next kid came out nose only just like the first one of the day. Except for the fact that she was much smaller and this was JuneCarter’s third pregnancy and third delivery of the day, this might have gone as bad as the first time. By this time the Dr. had already left, but Marky was home and since she has smaller hands, I convinced her to put on gloves and lube up and try to position the kid. She didn’t have to reach in very far and found the front feet. she got one of them pulle dforward and then it was easy to gently pull the kid while mama pushed andabout 3:30 pm little Flower was born.

This was an unusual year in that the majority of kids born are female, which helps build the herd. I wish that I could say there was no more drama or trauma, but Dolly had to mourn the loss of her boy. Which meant that she basically ignored Bunny for long enough that I thought I would have to bottle feed this kid. In fact I did take a bottle of colostrum replacer out and fed her and stimulated her until she stood up and took a few steps.

Dolly was acting almost exactly like Abby did last fall when she lost her baby. So last night when I went out to feed, Marky went with me and we got Dolly up on the stand and locked her in, then put Bunny on her udder and just let her drink until she had enough. I decided again that I would need to check the kids through the night and so when I went out at 10:30 I made sure that each new kid was snuggled down into the straw with at least one other kid for warmth. The weather here has been good the weekend with temperatures in the mid to upper 50’s during the day, but temp.s drop down to the upper 20’s at night and I was afraid that the kids would get too cold, especially Bunny if mama ignored her all night. 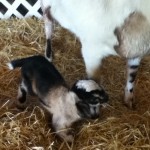 When I went out at 2:00 this morning the kids had moved and wandered about the shelter quite a bit, but I checked each one and they were quite warm and complained at being disturbed at that time of night. When the dog took me out at 6:00 this morning all of JuneCarters kids were with her near or under the milk stand, and Bunny was laying next to Dolly. I went in and put Bunny next to her mama’s udder and Dolly stood up and then Bunny stood up and nursed and Dolly just looked like a proud mama.

I learned on the first group of kids that you can’t take for granted that the mom will feed all of her kids. I lost one kid that first year when the mama did not let her eat and pushed her away. My mentor Mark showed me how to check their belly to make sure they had been eating and so I have been checking all of the kids every time I have been out in the pen today.

The other thing I have observed is that all of them are able to pee and poop. This means that they are eating and processing the food correctly. Parents will understand this, first they poop black tar like stuff, then they poop yellow as they process the colostrum, then as they transition to regular milk and more solid foods they start making the little pellets I expect from goats. This evening Bunny was pooping yellow. That is progress!

Now, I need to get some sleep. 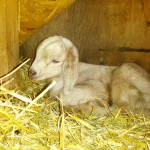 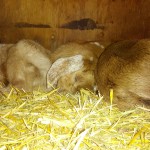 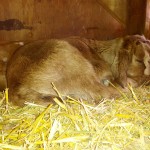