Last time I posted I wrote about Loretta having pneumonia and treating her. I had her isolated with Skeeter to keep the other goats from pestering her. She seemed to be doing better and eating  and gaining weight. I had the Vet. out to vaccinate the entire herd. So all of the girls and boys got an eight way and a tetanus shot that was on the 2nd of april. Everything seemed to be going well. I am still waiting for the CAE test results on Skeeter and Dolly. 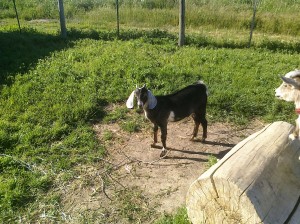 On Friday morning  the 5th I went out to feed and found Loretta with her head caught between the tire and the side of the chicken coop/goat shelter. She did not respond to my voice in any way and I could see that she had been struggling to free herself. I thought she was dead. I tried to free her as gently as possible and when I got her head unstuck and laid her down on the ground she began kicking and breathing again. I moved her into the smaller shelter so she would be sheltered from the rain that was predicted. The Vet. suggested I try to have her sit up so that her rumen would continue to work and to that purpose I had her propped up against a hay bale. She did not stay up very long and I kept propping her back up every time I went out. I picked up a couple of shots from the vet and by the end of the day she seemed to be resting better, but would still not stay sitting up and I could not get her to eat or drink. I started putting water in her mouth with a large syringe and got her to sort of nibble on an apple slice. I did not expect her to live out the night.

I did my usual rounds at 10:30 that night and checked on Loretta and sat her back up. I went in to the other pen to check on Connie since she was due to kid in about a week. I had noticed that she was no longer making her rhythmic grunting and she did not eat much grain when I fed that night, but I figured it was just because she was so close to kidding. I scratched her behind the horns like she likes me to. I told them all good night and went to bed.

I went out to feed at 8:00 and was not greeted by Connie. She looked like she was still sleeping, but when I went in to check her she was cold. She had died sometime during the night. I was so angry and frustrated at this that I let out a primal scream which brought Marky running out of the house. She was only one week from birthing kids and even if they had been boys like the last 2 years I would have welcomed them. I was almost sure that she would have girls this time. I felt like someone had kicked me in the gut.

I finished feeding the rest of them and Loretta was still kicking. Literally kicking so much that I had to set her up again. I still could not get her to eat, but I got some water in her and went back to remove Connie from the other pen. After I moved her I went inside to call the Vet. I was told she was not back from American Falls yet but they took a message and I waited for a return call  realizing that she may be very busy (high school rodeo that morning). I did not hear from the Vet. at all that day so I called the guy who’s business is dead animal removal. He was able to come within half an hour. It costs $100 to have them pick up a goat. Connie was so big and heavy I did not think I could handle her on my own, much less ask my wife to help.

I spent the rest of the day setting Loretta up and trying to get her to eat and drink. By 5:00 it was evident she would not last much longer and about 6:00 she died. I decided to just bury her here. First, I did not have another $100 and second, she was not as big and heavy as Connie. Besides the DAR people could not pick her up until Monday and I did not want her just lying around for a day and a half. I got out my brand new post hole auger and it made quick work of digging a grave for Loretta and we buried her on Sunday.

I did hear from the Vet. on Monday and she apologized for not getting back to me. It seems like she never got the message I left. She would have liked to do a necropsy on Connie to determine the exact cause of death. Between us we have been  trying to figure out what might have caused both deaths. I don’t know what I missed as far as signs, but I am keeping a much closer eye on all of the goats right now. So far everyone else seems to be healthy and JuneCarter is due to kid on Monday 4/15.

I guess I need to say something here. These animals are NOT pets! I do tend to treat my livestock like that sometimes and I try to make them happy to be here, but they are not pets. Connie and Loretta were valuable herd members and I lost not just two good milk goats, but there were possibly three or four goat kids that will now never see the light of day, or play in my pastures and that is doubly sad. I understand that this is part of what can happen in farming/ranching. I don’t like this part, but it happens and I will move on and try to learn from this.

I have also decided to sell Rosie this spring. She is the root cause of Loretta’s health problems. She bullied Loretta by not letting her eat and so she got sick and the extra trauma and injury to her neck is what I think finally killed her. I cannot allow Rosie to be in with new kids, so if I don’t get her sold by tomorrow, I will put her in the pen with the bucks. I feel somewhat OK with doing that since I think Rosie is past breeding time for this year. I am also selling Buck-O since I have used him 2 years now and need to diversify the gene pool. I already have a replacement for him. I really don’t want to feed 2 non-producing goats through the summer.

There will be a three and a half week gap between JuneCarter’s kids and when Dolly and Skeeter deliver. I was supposed to have three weeks of babies and then a two week gap, but now I just look for three healthy deliveries. I don’t think I mentioned it in the last post, but I believe that Rascal finally figured out which end is which(ifyouknowwhatimean). I will be observing Abby next week to see if she goes into heat or if the little snot actually got the job done. If Abby is pregnant that will mean end of august babies. I think that is cutting it close for having really small goats during the winter, but I think it will be OK. They should be cute little buggers.

This spring I decided to expand the flock here at StoneFace. I bought 10 more chickens and 4 ducks. The chicks are an assortment of americaunas, gold sexlinks, black sexlinks, and one australorp. The older chickens are now in their third year and egg production is slowing down. I have read that most chickens are only good for about 2-3 years of egg production so I needed to get their replacements established. I have almost got their new chicken yard enclosed and I am hoping that will get them out in the sunshine, grazing and laying more eggs. I want to try pasture raising the new birds and see if that makes a difference in the health and egg production. 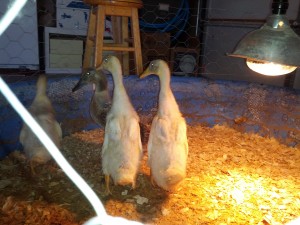 The ducks are a breed called Indian Runners. They are supposed to be a good egg laying type and I have been reading that they like to keep the garden free of bugs. I will be putting in a “duck pond” for them, but they may also enjoy the yard being flood irrigated this summer. This will be a (hopefully) fun new venture here at StoneFace. I have never eaten duck eggs yet. I look forward to trying them.

Time now to get back to work I have chicken and duck shelters to build.