It’s the most wonderful time of the year!

I only just finished the Summer summary and now it is time for the year end review. Hard to imagine that the year could go any faster, but the OLD folks say it does.

Since it is now Christmas, I will first wish you all a Merry Christmas and a happy New Year! I hope that 2013 will find you closer to your goals and dreams.

Well, the garden failed almost completely this year, or more accurately I failed to successfully raise a garden this year. I was able to get a few carrots and beets and about 3 pickings
This September  Jon and his girlfriend both came out to  visit. She wanted to see the place and what he likes so much about it. while they were here they helped me clean out the goat shelter. She got to gather eggs from the chickens, and she even tried milking the goats. after cleaning the goat pen she thanked us for all for the experiences that week. I hope my son does not let her slip away. of goji berries as well as drying some goji leaves for tea. I also have enough sunflower seed that I can replant those next year, but I need to do some serious planning for this spring. I have been looking at both the “seeds of change” and the “seed savers exchange” catalogs and trying to put together in my mind what to grow and where to plant them. 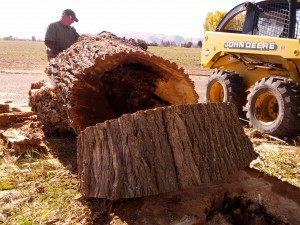 In October  before Jenni came home, we had to take one of the old poplar trees down that has stood for over 80 years. It was split from the trunk up one fork, rotten to the core and even down into the ground. Of course the tree people (no no,not Ents) could not schedule us until the day that heavy rain and high winds were expected. They did get it taken down during the breaks in the weather but they had to leave the cleanup for the next day

Jon visited again for the week of Thanksgiving. He and I split wood from the tree and trimmed the buck’s hooves. I can get all of the girls by myself, but I have no stand to lock the bucks into and so it takes 2 people to trim the boys. We talked with Mark and Nancy down the road to see about using their buck (Buddy) for Dolly and Skeeter. We took them down there the day after Thanksgiving, but either we missed the window of opportunity, or the change and being in with the buck scared them  out of heat and we had to wait for about 3 weeks for them to come back into cycle. by that time they were part of that herd and the buck had accepted them and so was ready to breed when they were ready.

I had been trying to keep track of  the doe’s monthly cycle to make sure they were in with the buck at the appropriate time. it took 2 tries for Connie and of course with Rosie’s problems last year she will get this year off from kidding. I have the timetable lined out on my to-do/project page for the expected due dates for each of the girls. This timetable should also include the dry-off schedule. I may get that done

Jenni was home from Oct 18 through Dec 14 with a short trip to see her brother in Seattle.  between her baking and Jon’s first visit and the chickens molting this fall I have yet to catch up on egg production. The chickens are making an effort, but are barely keeping up with the demand for eggs.

The goats are giving me 2QT/day with only one milking. I thought I had to milk twice/day, but then I talked with a lady in  the church who has been milking her one goat once a day for the past 3 years. The transition was easy and if you think of sustainable farming as not wearing out either the land or the farmer, then this is the way to go. I decided to milk in the late afternoon when the temperature will possibly be the highest for the day, and there is still light . I am getting more milk than I can use or give away and so I will be freezing as much of it as I can to make soap with. Jenni and I made soap this spring when she was here and the soap is quite ugly but feels good on your hands. I need to have a soap mold ready this time though.

Speaking of projects and  to do lists, I have been using a file called GTDTiddlyWiki to journal and document all of the projects and tasks I need to accomplish. Somewhere in the months between October and December both TiddlyWiki and Firefox changed and now the old version I had used for years does not work correctly. I am working on getting the new version configured correctly. It can be seen either via the link above, or use the todo list link in the sidebar.  I will have the old one up here on the site as an archive.

One last thing, while I was splitting the wood from the tree I injured my lower back and my shoulder. I have long since gotten tired of taking pills in the hopes of healing or curing pain and illness, and so I made an appointment with the local licensed Acupuncturist. I have many friends and relatives who tell me it works, so after the first session, imagine my disappointment when the pain only lessened and moved to other joints and muscles. Still, I have been taking pills for years with lesser results and so I went back for a second session. After three sessions I can tell a difference with the pain gradually going away instead of disappearing  overnight.

The Acupuncturist also recommended a web site to me which explains what is called “The Primal Blueprint”. Having read this site extensively for the past 3 week I have decided to give this lifestyle a try and since 12/1/2012 I have been trying to eat “primaly”. This is not easy, especially in this holiday season since the first thing I am trying to do is give up all grains and sugars. I give myself until my birthday to make this work or move on. I hope to hear my Doctor say I don’t need my medications anymore. I have lost 14 pounds since November 28th and my blood sugar readings have been improving. I have hope.

Again Merry Christmas to all and a very Happy New Year!

This entry was posted in goats, on the farm, Rural internet tech., Uncategorized. Bookmark the permalink.